Also known as motion problems, these problems ask you to describe motion. Time is a key variable that tells you to work with the kinematic equations. If you are only asked for positions and velocities, you may also be able to work the problem using Conservation of Energy.

How to Solve Kinematic Problems 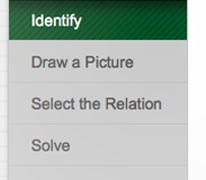 Any problem that asks you to describe the motion of an object without worrying about the cause of that motion is a kinematics problem, no matter what was given or requested in the problem. In some cases, you can use either kinematics or energy to solve a problem. However, if you are asked about time or horizontal motion you most likely will need to use kinematics.

Because kinematic problems focus on describing motion, your picture should be a picture of the motion or path of the object of interest. Make sure to mark key points on the picture (any point about which you are given information, any point about which you are asked for information, and any point such as the top of the motion where you know information (like vy = 0 at the top of the arc) without being explicitly told. Be careful: you do NOT know that v = 0 when an object reaches the ground. As soon as it touches the ground, there is a new force on it and the problem changes. The kinematic equations you will use are valid only up until the point where the object almost touches down.

In addition to marking key points, you should pick an origin. In other words, pick a location where x = 0 and y = 0. All other position values are then measured from that location.

Finally, kinematic variables (x, v, and a) are vectors, and so you will only be able to work with the equations one direction at a time. It is very easy to forget to work with the correct component while you are in the middle of the problem, so taking a few minutes to divide all vectors into components and organize them in a table will save a lot of mistakes and time in the long run.

There are three key kinematic equations. If you carefully select the equation which most directly describes the situation in your problem, you will not only solve the problem in fewer steps but also understand it better. The three equations, written for motion in the x-direction, are:

Note that some books give more than three equations. For example, they might reproduce these equations with –g instead of a for motion in the y-direction, or combine them together into a range equation. All of those are special case equations—they are partially solved versions of these three basic equations and only work in certain situations. (The range equation, for example, is only valid if the object lands at the same height from which it was thrown.) It is far better to always start with one of the three basic equations. They always apply and are always used in the same way.

The greatest challenge in kinematic problems is picking the best equation to use to solve your problem. The way to do this is to think about which answer you want. If the problem asks you for position, which position is it? If you want position at a given time, pick equation 1. If you want position at a given velocity, pick equation 2. v0 and a occur in all equations, and so if you are asked to solve for either of those variables you will need to identify two known quantities and select the equation that relates them.

Help! I can’t find an example that looks like the problem I need to work!